Chandigarh, 19 July : The Shiromani Akali Dal  took serious notice of the threat issued by former Chief Minister and Amritsar MP Capt Amarinder Singh to the officers working day and night for the development of Punjab and said that it seems that he has not learnt any lesson from his past mistakes.

In a statement issued from the party head office here today, the party Secretary and Spokesman and Punjab Education Minister Dr. Daljit Singh Cheema said that it was strange  that septuagenarian leader has failed to understand the pulse of the people of Punjab. He said that this is not the first time when he has tried to terrorize the officers from performing their bonafide duties. Dr. Cheema said that  prior to the 2012 Punjab Vidhan Sabha elections, in the same fashion he had urged banks against issuing loans to the state for development works in the state.

He said that apart from this he had gone a step further in asking the then Prime Minister Dr. Manmohan Singh, who was heading a Congress led  UPA government at Centre to stop grants worth crores  of rupees to the state  as he had apprehended that the development would cause big political loss to him in the elections.

The SAD leader said that fear factor of the erstwhile ‘Maharaja’  had  proved right as the people voted for the development initiatives of the SAD-BJP combine in 2012 elections. “History is going to repeat this time too and the same fear factor has gripped the former CM who has already read the writing on the wall,” he added.

Dr. Cheema also said that as the Congress led UPA government has been ousted by the people of the country and he is not in a position to  influence the NDA government,  so he had chosen an other novel way of issuing threats to the senior officers of the state to stall the process of development. 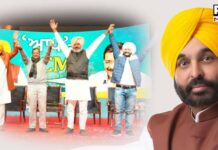