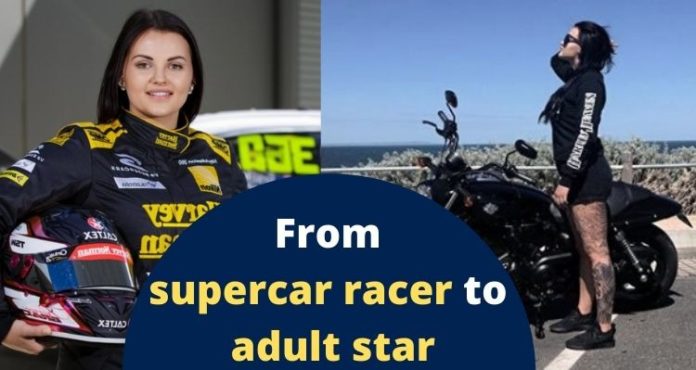 Australian female Supercar driver Renee Gracie turned to an adult film star to deal with her financial struggles. Renee Gracie had a fantastic beginning of her career in car racing. She became the first full-time female Supercar driver in Australia at the age of 14 years. However, Renee was not able to continue her career in motorsports due to her financial struggles.

As per the report, Renee Gracie had paired up with Simona de Silvestro in 2015 to participate in Australia’s iconic Bathurst 1000 Supercar race. Gracie and Simona were the first all-female pair to be a part of the race since 1998. Gracie continued to achieve success in her racing career. However, she was not given many opportunities. Likewise, she had to give up motorsports and look for an alternative career.

Later on, Gracie started working at a local car yard before deciding to enter the adult industry to tackle her financial struggles. She revealed that she was not able to make enough money for herself which is why she signed up for an adult website and started sharing videos and pictures.

What would your caption be to this photo?

Meanwhile, she managed to raise $3000 dollars in her first week as an adult star. Currently, she is having around 7,000 subscribers on her website. Gracie said that she has never been financially stable in her life. But, now she is happy with whatever she is doing in her life. Reportedly, she is earning around 2500 dollars a week as an adult model.

As I’ve grown older I’ve realized it’s hard to please everyone, but pissing them off is a piece of cake ?

What a day! Quali was such a bummer, Sim didn't get a lap in unfortunately just like everyone else. And as for my DVS race unfortunately we made a call to go to wets witch wasn't the correct call. Unfortunate but you gotta take a gamble with these things! Big day tomorrow ??

“It has been the best thing I have done in my whole life. It has put me in a financial position I could never have dreamt of and I really enjoy it. I am fine with whatever they want to call me. I am earning good money and I am comfortable with where I am at,” Gracie was quoted as saying by News Corp Australia.